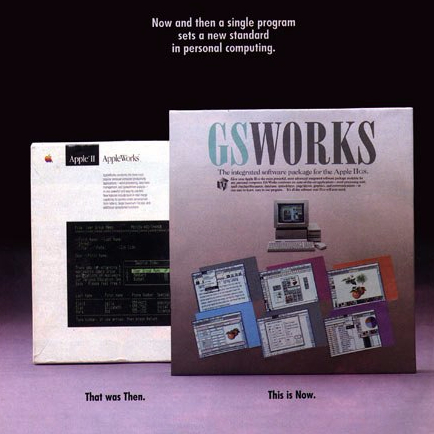 StyleWare was your classic startup slog. Way too much work. Very young brilliant programmers. Many soap operas of people in the sphere of StyleWare. Not much sleep; lot’s of junk food. A disastrous beach weekend. Some friendships lost. Some friendships made. This is not a blog about all of that.

What we produced was an integrated package for the Apple IIGS that had a word processor, database, spreadsheet, graphics program, page layout program, and a modem terminal, all integrated together. It used the brand new graphical OS, called GS OS. It was actually a pretty monumental achievement, especially since it was written in assembly language. The team at large had started on this project in July or August 1987. I joined in December. By March, there was (barely) enough functionality to start being able to demo pieces of it. Our boss kept saying, “We’ll be done in 2-3 weeks”, but that went on for months. We did not have vacation time, although two of the fellows took a few days each to get married.

On June 14, we were called into a company meeting, where it was announced that StyleWare, Inc., had been acquired by Claris Corporation, a wholly owned subsidiary of Apple Computer. It was undetermined at that point what else was going to happen, but the next day, the president and the other two founders had nice new cars.

We were going to AppleFest in Boston, a consumer trade show highlighting the Apple II. We weren’t allowed to tell anybody there about the acquisition, and were cautioned that talking about it on the plane or in restaurants could be a problem, as you never knew who was listening.

I was doing new builds for the show floor every night. I was fixing my own bugs, and having programmers dictate changes over the phone to me at night. Then I would build, test, and make new floppies to copy the software the next morning. Internet sure would have made that easier.

At some point, we found out that the president of StyleWare had received an invite to a party hosted by Apple. We knew he wasn’t going to go. So four of us showed up. The lady at the  door did not want to less us in. But we persisted.

“Hey, we are from StyleWare. You know who that is?”

“So you know we are one big happy family now?”

She sighed look at her feet, and said, “Fine. Here. Go. And don’t tell anybody I let you in.”

First time I ever crashed a party.

About a week after AppleFest was over, I got my job offer from Claris. It was a dramatic raise, but it required moving to Silicon Valley, as Claris was in Mountain View. That was OK with me. Of course, some things don’t change; I took home less from my paycheck after bills and taxes than I did in Houston… Oh, well. I took the job, because, well,  what was my alternative? I could have called the oil company guy for the position in Boulder, but it had been six months. Digital did not return my calls. There was nothing else in Houston. I did not know enough to know that all I had to do was get to San Jose, and I would find a job, but Claris got me there anyway, and that was good.

GSWorks was renamed AppleWorks GS, and we eventually shipped 3 versions, but the Apple II was near the end of its life, so it was not as successful as anybody hoped. Plus, the first version was very buggy and slow, and it never recovered from the ill-will that generated.

I will leave the rest of the story of AppleWorks GS and Claris Works to this article, written by a coworker, classmate, and friend.

I ended up working on FileMaker Pro. It was a great job for many years, and I was lucky to get it.